The following article was published by the Sacramento Bee about a movement for medical marijuana growers to become unionized. The medical marijuana issue is one that’s been debated and discussed from many perspectives and in several states throughout the U.S. Ultimately from an employer and employee standpoint,federal law still considers marijuana to be a illicit controlled substance, particularly in the workplace with regard to safety and drug testing. WorkforceQA found this particular angle on the medical marijuana discussion to be unique.

From The Sacramento Bee:

As organized labor faces declining membership, one of the country’s most storied unions is looking to a new growth industry: marijuana.

The Teamsters added nearly 40 new members earlier this month by organizing the country’s first group of unionized marijuana growers. Such an arrangement is likely only possible in California, which has the nation’s loosest medical marijuana laws.

But it’s still unclear how the Teamsters will safeguard the rights of members who do work that’s considered a federal crime.

“I didn’t have this planned out when I became a Teamster 34 years ago, to organize marijuana workers,” said Lou Marchetti, who acted as a liaison between the growers and Oakland-based Teamsters Local 70. “This is a whole new ballgame.”

The new members work as gardeners, trimmers and cloners for Marjyn Investments LLC, an Oakland business that contracts with medical marijuana patients to grow their pot for them.

Their newly negotiated two-year contract provides them with a pension, paid vacation and health insurance. Their current wages of $18 per hour will increase to $25.75 an hour within 15 months, according to the union.

Historically, the Teamsters are no strangers to entanglements with federal law enforcement, from the infiltration of the union by organized crime to the disappearance of union leader Jimmy Hoffa. If the federal government decided to crack down on Marjyn, Marchetti said the union was still figuring out how it might intervene. 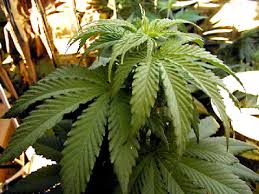 Growing marijuana outdoors is not hard – the nickname “weed” is well-earned. Indoor growing operations require more know-how and more work. But the most labor-intensive part of the process comes at harvest time, when growers rely on small armies of trimmers to clip the plant’s resin-rich buds.

The work can be difficult and the hours long – and trimmers cannot count on federal labor regulations to protect them while doing work banned under federal law.

Michael Leong, assistant regional director for the Oakland office of the National Labor Relations Board, said he did not know of any case in which the federal government had been asked to mediate a dispute involving a business that was blatantly illegal under federal law.

He also said it wasn’t clear if the new Teamsters would count as farmworkers, which would put them outside the NLRB’s domain.

Michael Lee, general counsel for the California Agricultural Labor Relations Board, said the growers probably would qualify as agricultural workers. Any conflict between workers and the union would likely fall under his board’s jurisdiction, but contract disputes between workers and management would have to be decided in state court.

Even within the state, marijuana cultivation has remained in the shadows as retail dispensaries have flourished because California’s medical marijuana law provides no clear rules for growing the plant.

The Oakland City Council sought to change that dynamic in July by making the city the nation’s first to authorize industrial pot cultivation. More than 260 potential applicants have expressed interest in competing later this year for four permits for large-scale growing operations, said Arturo Sanchez, an assistant to the Oakland city administrator who will ultimately issue the permits.

Union membership will not be a requirement for receiving a permit, but labor standards are one of many factors that will be considered. The union organizing effort and contract negotiations went smoothly at Marjyn, which hopes to win one of the permits.

“There was no strife between employees and management at all,” said a Marjyn worker who would only identify himself as Rudy L. because he worried about his personal security if it became known that he grew marijuana for a living. He said he was not worried about getting arrested because he believed Marjyn was operating in compliance with state law, though the threat of a federal crackdown is never far from anyone’s mind.

About 100 workers in Oakland’s retail medical marijuana dispensaries joined the United Food and Commercial Workers in May. The Teamsters have never tried to organize dispensary workers, because retail has never been an industry in which they have been traditionally involved, Marchetti said.

Marchetti said the union would not have gotten involved with the growers if it didn’t believe the business was legitimate under state law. “The Teamsters would never organize an illegal business,” Marchetti said.